Élie Bouhéreau (1643–1719), a French Huguenot refugee, settled in Dublin in 1697 and served as Keeper of Marsh’s Library. He led a varied and well-travelled life — an active member of the Republic of Letters during his youth, he acted as secretary on a British diplomatic mission in the Swiss Cantons during the 1690’s and subsequently during a military campaign in Piedmont. His diary and account offer political, personal, social, cultural and diplomatic insights, shedding light on the history of Ireland, France and Europe more broadly.

The diary offers a unique perspective on the experience of exile and diaspora through the primary reporting of one affected by religious persecution, featuring recurrent references to the live and struggles of refugees, the distribution of passports and large movements of people hoping to relocate family members. It also provides eyewitness accounts of military exploits and contain domestic details pertaining to the lives (and deaths) of Bouhéreau’s children and grandchildren. His financial accounts are of equal interest, offering an exceptional picture of family life and social realities in Ireland in the eighteenth century.

This edition reproduces the French text of the manuscript held in Marsh’s Library, along with a scholarly English translation. 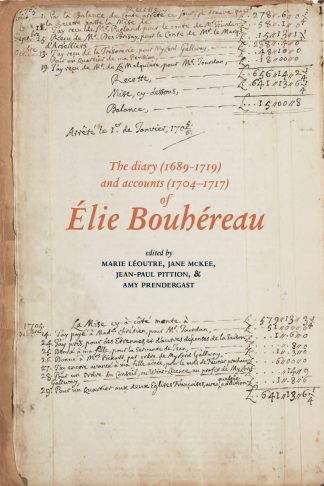