Volume 2: 1794-1801
The Drennan-McTier Correspondence is unique. Between 1776 and 1819, William Drennan, a doctor in Newry and Dublin, and his sister Martha McTier in Belfast exchanged over 1,400 letters, discussing every aspect of their lives. William campaigned for political reform and Roman Catholic emancipation. He was a founder of the United Irishmen, and was tried for sedition in 1794. Martha shared his political convictions and their letters provide a first-hand account of the events which led up to the 1798 Rebellion, and its aftermath. William later became a well-known political writer and a poet. The measure of the importance of this correspondence to both of them is that it has survived virtually intact, providing the historian with a wealth of information about the period, and the general reader with a unique window on to late eighteenth-century life. 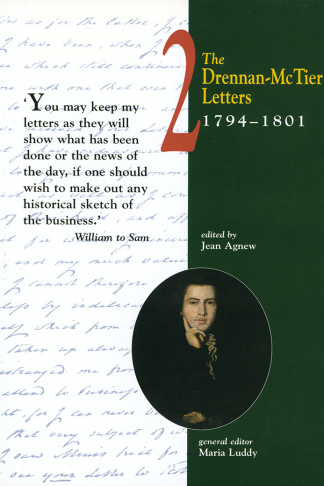