This book brings together in the one volume calendars of the eight separate components of the archive of the Clements family – from 1795 earls of Leitrim – which are mostly of different provenances and are now mostly in different locations. Although there is documentation of earlier and more recent date, the bulk of the material falls within the period 1750–1850. The locations principally documented are counties Cavan, Donegal, Galway and Leitrim, and Dublin City.
The archive illuminates the careers of the three best-known members of the Clements family: Nathaniel Clements (1705–77) of Ashfield, Co. Cavan, Henrietta Street, Dublin, and The Ranger’s Lodge, Phoenix Park, a Treasury official, master of intrigue, amateur architect and failed banker; his great-grandson, Robert Bermingham, Lord Clements (1805–39) of Lough Rynn, Mohill, Co. Leitrim, MP for Co. Leitrim within the period 1826–39, the bright but short-lived hope of the Irish Whigs; and R. B. Lord Clements’ younger brother, William Sydney Clements, 3rd Earl of Leitrim (1806–78) of Lough Rynn, of Manor Vaughan, Carrigart, Co. Donegal, and of Killadoon, Celbridge, Co. Kildare, the ‘Wicked Earl’ and sexually predatorial landlord of legend, who famously was murdered on his Co. Donegal estate in l878.
Even better-documented, however, is the personal and public life of their less well-known father, Nathaniel Clements, 2nd Earl of Leitrim (1768–1854), a high-principled and thoughtful Irish Whig and a conscientious family man, whose personal, political and financial troubles were a constant source of anxiety to himself. His correspondence of the period c. 1800–1850 is full of information about the upbringing, education, marriages, careers, illnesses and other misfortunes of his large family of five sons and three daughters, and about the disruption of domestic harmony caused by the mental instability of his beautiful wife, Mary, daughter and co-heiress of William Bermingham of Rosshill, Clonbur, Co. Galway.
The archive is also very rich in estate material. This derives particular importance from the fact that most of the Clements estates were located in fairly remote and ill-documented parts of Ireland: Mohill, Manor Hamilton and Newtowngore, Co. Leitrim; north Donegal; and Joyce’s Country, Co. Galway. The Lough Rynn (Mohill) estate archive is especially voluminous, notably in the period between l832 (when a family residence was first built on that estate) and the death of the 3rd Earl of Leitrim, who spent a good deal of his time at Lough Rynn, his favourite place of abode, from l839 onwards.
Other highlights of the archive are the minutely detailed business ledgers of Nathaniel Clements and his second son, Henry Theophilus, 1728–85, the fast-and-furious correspondence about Co. Leitrim elections and local government, c. 1780–1852, the furniture and picture inventories of the principal family seat, Killadoon, Co. Kildare, l807–1856, and the cryptic but evocative diaries of the 3rd Earl of Leitrim, 1857–72. 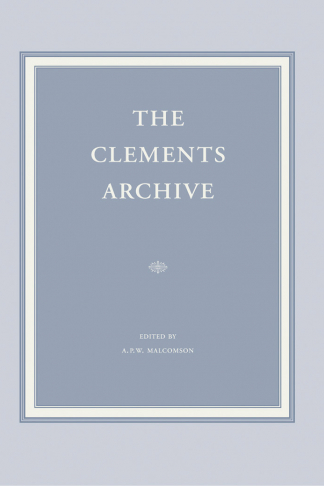 You're viewing: The Clements archive €85.00
Add to basket