View basket “Select guide to Trade Union records in Dublin with details of unions operating in Ireland to 1970” has been added to your basket.

Since the early decades of the nineteenth century a large number of local, national and United Kingdom craft and trade societies and unions have operated in Dublin. Most were small and short-lived, but some grew to form today’s major unions. This guide, based mainly on an extensive survey of trade union records in union premises and institutions in Dublin, is an invaluable reference book. It includes outline histories, membership figures and descriptions of the records for 128 unions, as well as listing over 950 trade societies and unions which operated in Ireland until c.1970. 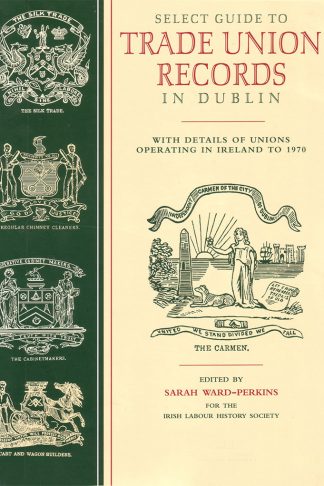 You're viewing: Select guide to Trade Union records in Dublin with details of unions operating in Ireland to 1970 €15.00
Add to basket
We use cookies to ensure that we give you the best experience on our website. If you continue to use this site we will assume that you are happy with it.OkCookie Policy