The manuscripts of the ‘Purgatorium Hibernicum’ (c. 1670)
and ‘The Fingallian Travesty’ (1686), together with the printed Irish Hudibras (1689), constitute a significant group of unexplored literary texts from Restoration Ireland. Though all are versions — in coarse, rhyming Hiberno-English and ‘Fingallian’ — of the same verse travesty of Book VI of the Æneid, they differ widely from each other.
For this edition, the text of the ‘Purgatorium’ — the longest and most interesting of the three — is presented as it appears in the manuscript, with Virgil’s noble lines copied out below each passage of bawdy, exaggerated ‘stage-Irish’ verse, and intermittent sidenotes providing explications of the verse in Latin, English and Irish. The Hiberno-English text itself contains otherwise unrecorded linguistic coinages as well as syntactical and grammatical features borrowed from Irish.
The second text, ‘The Fingallian Travesty’, though derived from the same source as the ‘Purgatorium’, was designed for a readership in England and clarifies many of the obscurities in the ‘Purgatorium’. Reference is also made to the 1689 London printing of The Irish Hudibras. Scholars of many disciplines, particularly cultural, linguistic, literary and social historians, will find much to interest them in these hitherto inaccessible texts. 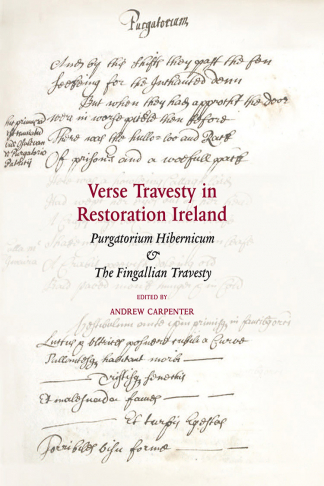