George I and George II, 1714-27. The proclamation was a crucial instrument of government and administration in the seventeenth and eighteenth centuries; it was also the most frequently encountered item of official print. Long published, promulgated and posted in the immediately recognisable broadside format, and subsequently printed in the Dublin Gazette, proclamations were normally issued by the Lord Lieutenant (or Lords Justices) and Privy Council. Since they engaged with virtually every aspect of government, they were an essential complement to the act of parliament in the governance and administration of the kingdom. On average, between ten and thirty proclamations were issued annually between 1660 and 1820, though the frequency with which they were issued, and the subjects they engaged with, depended on the political state of the kingdom. This edition, arranged in five volumes, presents the texts, or a detailed guide to the content of some 2,500 proclamations, and allied documents, issued in Ireland.

Please note that there is no introduction to this volume. The introduction to all volumes in The proclamations is in Volume 1: Charles II, 1660-85, which is out of print.

Volumes I and II sold out. Limited copies of III, IV and V available. 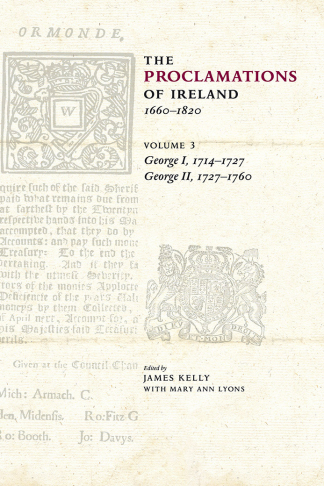