View basket “The Edith Oenone Somerville archive in Drishane: a catalogue and an evaluative essay” has been added to your basket.

The minutes of the Ulster Women’s Unionist Council and Executive Committee, 1911–40

Established in 1911, the Ulster Women’s Unionist Council attracted an unprecedented number of women into politics. Within a year of its inauguration the Council was the largest female political organisation Ireland had ever seen, with hundreds of thousands of members. Although led by members of Ulster’s aristocratic elite, the Council aimed and succeeded in having both ‘the peeress and the peasant’ represented in its ranks.

Formed with the primary objective of assisting male unionists resist home rule for Ireland, the UWUC quickly became a very significant propaganda, electioneering and fundraising machine.Taking on a more philanthropic role during the First World War, the subsequent introduction of votes for women swathe political focus of the organisation become resumed with renewed vigour.

Published here for the first time, the highly readable minutes of the Ulster Women’s Unionist Council reveal the pivotal work of a unique organisation at a time of great change, not only in the history of women, but in the history of Ireland. 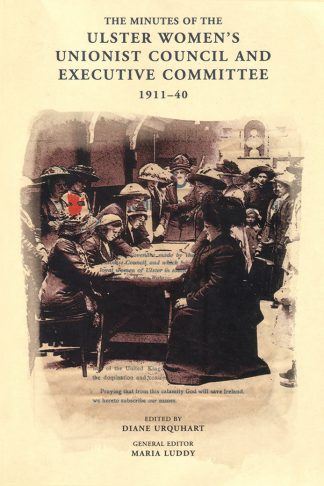 You're viewing: The minutes of the Ulster Women’s Unionist Council and Executive Committee, 1911–40 €15.00
Add to basket