View basket “Calendar of State Papers, Ireland, Tudor Period, 1566–1567” has been added to your basket.

Preserved in the British Library, MS Harleian 697 ‘The Council Book for the Province of Munster’ provides a rare insight into the workings of English provincial government in early seventeenth-century Ireland. Scattered within its pages is previously overlooked information on the government’s preparations for the forthcoming Battle of Kinsale (1601), and equally significant a wealth of detail illuminating the lives of the local Irish population in the aftermath of the English victory. Here also are a wide variety of administrative records, the likes of which have rarely survived from other regions, such as presidential court cases, county assizes and gaol deliveries, appointments of local officials, protections, concordata, and proclamations, as well as correspondence with Dublin and with the privy council in London. The documents are mainly in English with a few in Latin.

The manuscript has been transcribed and edited by Margaret Curtis Clayton and this edition includes extensive indices of persons, places, and subjects. This volume will be welcomed by historians generally as its pages contain legal, administrative, religious, genealogical and social information about a hitherto vague and dark period of Irish provincial history.

The council book for the Province of Munster 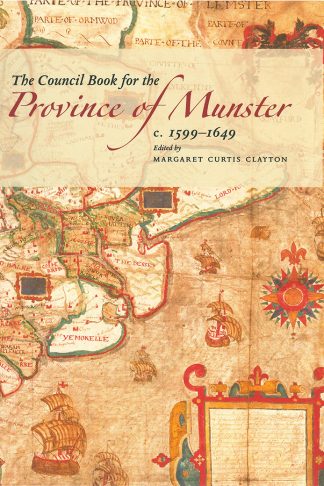