The changes that took place in the sixteenth and seventeenth centuries in the natural sciences from the world of Copernicus to that of Newton – constitute some of the most profound transformations that have taken place in human history.
By no means the least important aspect of this historical shift is the manner in which its meanings and implications were absorbed into the wider world of the intellect. In this respect a central role was played by the many scientific societies of the time, institutions which among much else allowed the pioneering thought of those working at the cutting edge of science to permeate broader and more pervasive strata of life and culture.
The Dublin Philosophical Society which flourished in the quarter-century after 1683 constituted Ireland’s most direct response to the ‘new science’ of the time. Its members saw themselves as belonging to a universal world of learning and were in touch with colleagues in England, Scotland, France, Italy, Germany, and the Low Countries. Their cultural dynamic was driven by a complex engine made up of memories, contacts with relatives and friends across the Irish Sea, a feeling of separation from the native Gaelic and the old English elements in Irish society, as well as by a distinct sense of superiority and efficiency.
This two volume edition represents the first occasion on which the complete papers – taken here from numerous archives and libraries throughout Europe – of a seventeenth-century scientific society have been published in scholarly and annotated format. As such it constitutes an important contribution both to Irish History as such and to the general intellectual history of the time. 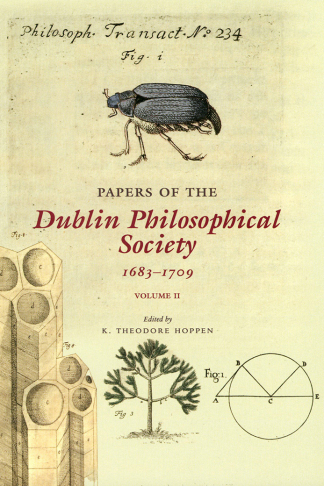