During his long life, James Ussher wrote many books and generated a voluminous correspondence, much of which is extant and preserved now in this edition.

Ussher’s correspondence reflects his political and ecclesiastical role as the head of the church in Ireland at a crucial time when it was forging its identity as a separate enclave from the Church of England. The scholarly network revealed by his correspondence illustrates his pivotal role in Irish, British and European intellectual life.

His contemporaries recognised the importance of his work and Roman Catholic writers such as David Rothe, bishop of Ossory, and William Malone, the noted Jesuit controversialist, were as anxious as his colleagues in Trinity College to avail themselves of his renowned historical research, not to mention the extensive library he amassed as archbishop of Armagh. In Britain he corresponded with the leading scholars of his day including historians such as William Camden, Sir Robert Cotton, and John Selden, celebrated mathematicians and scientists such as Thomas Lydiat and John Bainbridge and the radical educational and ecclesiastical reformers John Dury and Samuel Hartlib.

This edition brings together 680 letters covering the period 1600–1656 and includes translations of all Latin, Hebrew and Arabic texts. Indexes of persons, places, subjects and published works combine references across all three volumes.

What historians are saying about this edition

“Ussher, one of the foremost Irish scholars, with an international reputation,  has got what he deserves––a modern edition of his correspondence respresenting the best of Irish and international scholarship. Elizabethanne Boran and the Irish Manuscripts Commission deserve our heartfelt thanks for bringing this exemplary project to such a successful conclusion.”

“James Ussher was one of those forbidding early modern polymaths who never received the attention he deserved, despite the recognition of his centrality to the seventeenth-century Republic of Letters. By embarking on the daunting task of preparing a critical edition of his surviving correspondence, Elizabethanne Boran not only helps redress the long overdue neglect in evaluating Ussher’s broad range of interests, but she furnishes the means to appraise his role as a patron of, and collaborator in, a large number of scholarly enterprises.”

“It would be hard to imagine a more genuinely close-up encounter with the Republic of Letters, and what its intellectuals read, argued and wrote, as they adjusted to conditions in the confessionally divided landscape of post-Reformation Europe.  A labour of love, this edition will stand as an enduring monument to the kind of scholarly tenacity and resourcefulness that James Ussher himself would have admired.” 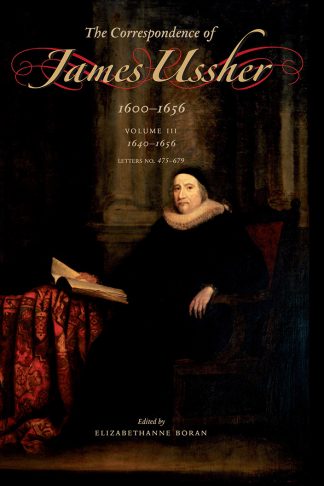