The acts of James II’s Irish parliament of 1689

This is the first modern scholarly edition of the acts of King James II’s Irish parliament of 1689.

Like all the official records of James’s parliament, the enrolled copies of its thirty-five acts were ordered by William III’s Irish parliament in 1695 to be ‘openly cancelled and utterly destroyed’. But the text of twenty-five of these acts remains extant and it is from the earliest surviving copies that this edition has been compiled. It supersedes Thomas Davis’s edition which was neither comprehensive nor based on the most authentic sources.

The 1689 acts dealt with the land settlement, the war, taxation, the legal system and the constitutional relationship with England, religious liberty and tithes, trade and economic development, among many other topics. The acts show a Catholic governing class legislating both for present needs and for a Jacobite settlement that was not to be. 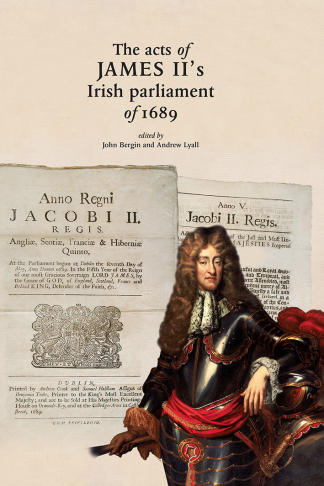