The second of this three-volume series provides historians with easy access to important French correspondence relating to the Glorious Revolution and the Williamite war in Ireland. Very little documentary evidence has survived in English from the Jacobite side of the conflict but French manuscripts give an account of events as seen through the eyes of James’ french allies. These documents, in french, cover every aspect of the war from the military and naval engagements to the cost of a horseman’s uniform, providing an unparalleled source for the study of the Jacobite side of this war, one with significant Irish and European perspectives. This edition complements the material contained in James Hogan’s edition of the correspondence of le Comte d’Avaux (IMC, 1934). There is no introduction in this volume. An introduction to this series (in english) can be found in Volume I. 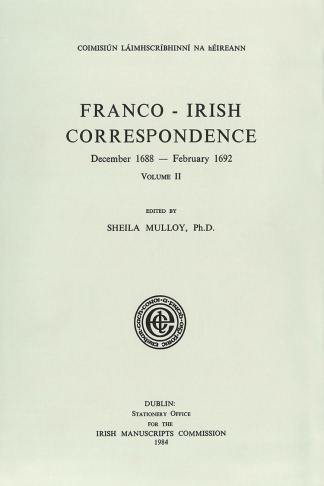 You're viewing: Franco-Irish correspondence, 1688–1692, Vol. 2 €65.00
Add to basket
We use cookies to ensure that we give you the best experience on our website. If you continue to use this site we will assume that you are happy with it.OkCookie Policy