View basket “Analecta Hibernica No 43” has been added to your basket.

Includes a report to the Minister for Arts, Heritage and the Gaeltacht for the period 1 January to 31 December 2015 and the following papers: J. J. O’Connell’s memoir of the Irish Volunteers, 1914–16, 1917, edited by Daithí Ó Corráin; ‘To tell you all about it’: a letter from Mrs Marion Kelleher to family members written in the immediate aftermath of the 1916 Rising in Dublin, edited by James McGuire; ‘A citizen’s diary’: Henry Hanna’s narrative of the  1916 Rebellion, with annotations by Denis Johnston, edited W. J. Mc Cormack; ‘My experiences in the 1916 Rising’ by Father Columbus Murphy O.F.S.C., 29 July 1916, edited by Conor Mulvagh and John McCafferty. 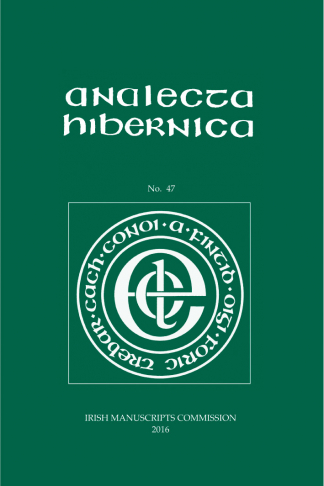 You're viewing: Analecta Hibernica No 47 €30.00
Add to basket
We use cookies to ensure that we give you the best experience on our website. If you continue to use this site we will assume that you are happy with it.OkCookie Policy