Eoin MacNeill was one of the most significant figures of twentieth century Irish history, a distinguished scholar, language enthusiast and politician. He founded the Gaelic League in 1893 and the Irish Volunteers in 1913. He opposed the plans for a rebellion in 1916 when he issued his controversial
countermanding order on Easter Sunday 1916. He was interned for a year and after his release continued to play a leading role in the War of Independence as a member and minister of the First Dáil. In the early 1920s he was Minister for Education in the first Free State government and in 1924 was also appointed as Irish representative on the ill-fated Boundary Commission.

During the 1930s MacNeill began to write a memoir of his momentous life and career. It starts with his childhood in Co. Antrim, his education in Dublin and goes on to describe his involvement in the language revival, the Volunteers and the nationalist movement after 1916. The memoir concludes
with MacNeill’s account of the Irish Boundary Commission which led to his departure from politics in 1925 and his return to scholarship.

This important memoir has never been published and the Irish Manuscripts Commission is delighted to publish it as a timely tribute to MacNeill, appointed the Commission’s first chairman in 1928. 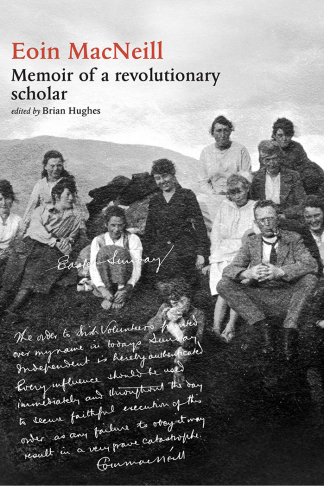 You're viewing: Eoin MacNeill: memoir of a revolutionary scholar €25.00
Add to basket