The 1641 Depositions are witness testimonies mainly by Protestants, but also by some Catholics, from all social backgrounds, concerning their experiences of the 1641 Irish rebellion.

Volume IV: Dublin What was to become the Dublin deposition book was originally planned as a documentary narrative of the outbreak of the rebellion. The Dublin depositions are distinctive in two ways. Because city residents had invested widely in property outside the county and because refugees sometimes gave Dublin addresses, the losses they report are countrywide. And because Dubliners began to use the depositions as a way of registering complaints a vivid picture emerges of a city under extreme stress. 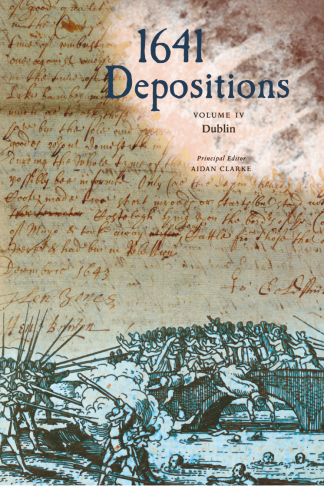