View basket “Analecta Hibernica No 37” has been added to your basket.

Includes a report to the Minister for Culture, Heritage and the Gaeltacht for 2019 and the following papers:
Obituary: Brendan O Donoghue; Violence, justice and self-interest in Elizabethan Connacht: A journal account of the Commissioner’s Proceedings in Galway, 1589   (Christopher Maginn); Parallel lives — a comparison between Jugurtha, king of Numidia and Hugh O’Neill, earl of Tyrone by Sir James Perrot (Hiram Morgan); The correspondence of Ignatius Geoghegan and Richard Strange, 1784–1797 (Eoin Kinsella); Henry Joy, remarks on public charity with an account of the rise, progress and state of charitable foundations in Belfast, 1818 (Jim Smyth); The Anglo—Irish Treaty: the Catholic Appeal Committee to Pope Pius XI, 10 December 1922 (Patrick Murray); Memorandum on the oath of alllegiance from Monsignor John Hagan, Rector of the Irish College, Rome to Eamon de Valera, 31 May 1925 (Patrick Murray); 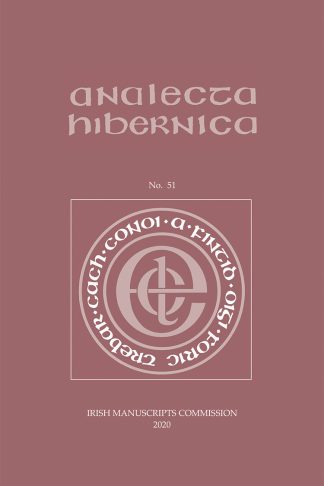 You're viewing: Analecta Hibernica No 51 €30.00
Add to basket
We use cookies to ensure that we give you the best experience on our website. If you continue to use this site we will assume that you are happy with it.OkCookie Policy