View basket “Analecta Hibernica No 33” has been added to your basket.

Analecta Hibernica volume 40 contains a range of significant primary documents dealing with the medieval, early modern and modern era.
Among the highlights of this issue are Patrick Kelly’s edition of Sir William Domville, ‘A Disquisition touching that Great Question Whether an Act of Parliament made in England shall bind the Kingdom and People of Ireland without their Allowance and Acceptance of such Act in the Kingdom of Ireland’. Acknowledged as one of the most important statements in support of the legislative independence of the kingdom of Ireland, it is expertly introduced and edited by Dr Kelly who presents a definitive text, with all the variant readings.
The second highlight of this issue is ‘The Lucas Diary, 1740-41’ edited by Brian Ñ
Dà«¡igh. This fascinating farm diary and commonplace book provides a detailed record of the daily routine of a working farmer in county Clare between May 1740 and October 1741. It provides an account of livestock, farm expenditure and the employment of day labourers, and many other matters in the life of Lucas, and offers a unique vista on the opaque world on rural life and work of a member of the Church of Ireland below the better-documented level of the gentry. Its publication, with an extensive index, makes available one of the most valuable accounts of rural life and economy in the first half of the eighteenth century.
The volume also completes the account of the arrest of the fifth earl of Kildare and Sir Christopher Preston in 1418. An incomplete account of this episode was originally published in Analecta Hibernica 29 (1980) by Jocelyn Otway-Ruthven. The discovery by Peter Crooks of the ‘missing membrane’ allows the story to be fully told. The final document in the collection is W.R. Robertson’s report on ‘the present condition of agriculture in counties Cork and Kerry’, which was written in February 1867 with a view to assisting landowners to improve agricultural practice. Edited by Aileen McClintock, it provides an insightful account of the economy of south Munster in the second half of the nineteenth century, and will be of compelling interest to students of the Irish economy in the second half of the nineteenth century.
This volume also contains obituary notices of two past members of the Irish Manuscripts Commission Margaret Griffith and Breandà¬ MacGiolla Choille. 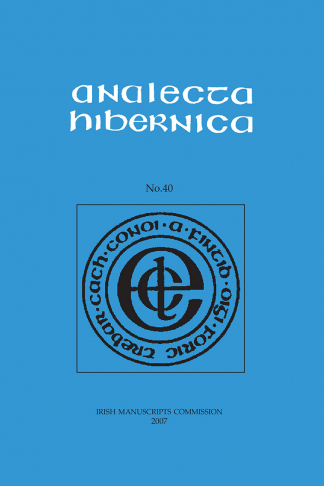 You're viewing: Analecta Hibernica No 40 €25.00
Add to basket
We use cookies to ensure that we give you the best experience on our website. If you continue to use this site we will assume that you are happy with it.OkCookie Policy