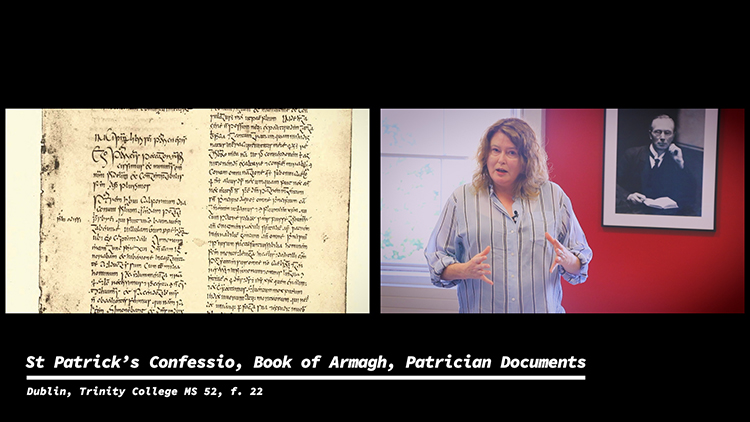 As part of its 2021 contribution to the Dublin Festival of History IMC presents two short films on the theme of primary sources for gender and social history.

In the second of these Dr Elva Johnston, whose research interests are in conversion, materiality, literacy, sanctity and sexuality in late antique and early medieval Ireland has chosen as her favourite IMC edition one of the earliest IMC publications — the 9th century Book of Armagh: The Patrician documents. Edited by Edward Gwynn it was published in 1937 and was one of a series of collotype facsimiles of medieval Irish manuscripts published by the Commission which included the Book of Lecan and the Book of Lismore.

Explaining how the various texts of the Book of Armagh are arranged, Dr Johnston shows how in one of the two documents written by Patrick himself — the Confessio — women were central to his mission in Ireland. In the Confessio Patrick talks about his conversion and experience of Irish society and mentions women at key points in his text. When combined with contemporary museum artefacts his writings give us an idea of how Irish society worked in the 5th century. Watch this video to see how the narrative changes and women are absent from the story as told by later 7th-century commentators.

The digitised version of the Book of Armagh referred to by Dr Johnston can be viewed on the Trinity College Dublin website here and the Royal Irish Academy project based on the Confessio can be viewed here.