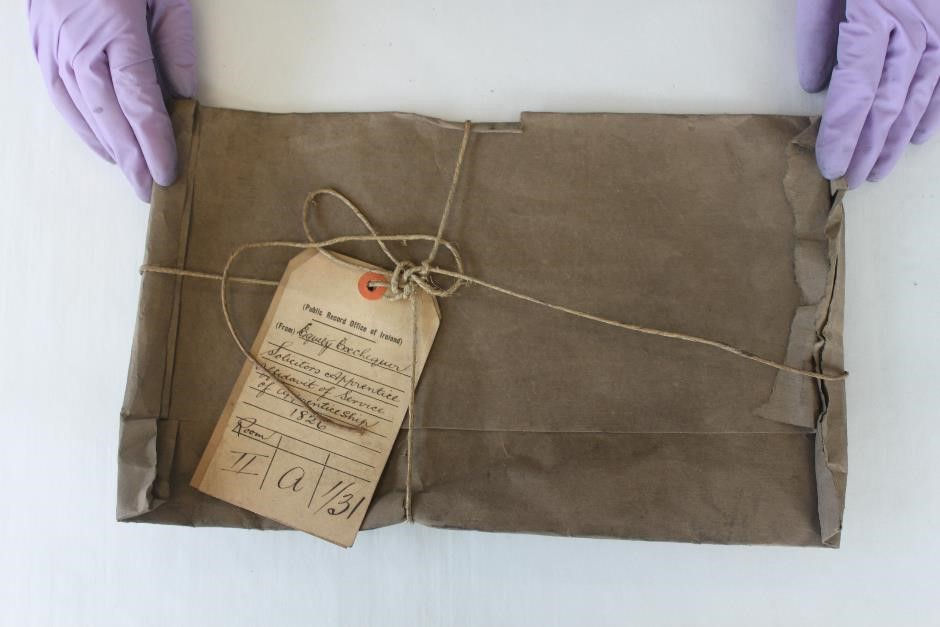 A team of conservators at NAI, led by senior conservator Zoë Reid, carried out an initial survey of salved materials in late 2017. Whilst there was a brief description of the contents on the parcel labels (see right), the documents inside had not been accessible to archivists, historians or researchers since they were first wrapped.

The survey identified the parcel-contents and quantified the material present, along with the condition and historical significance of the documents identified. Between August and December 378 items inside c. 220 parcels were assessed, documented and photographed. The material ranged in date from the 14th to the early 20th centuries and included among other material eight bundles of Common Law: Judgments Warrants to Satisfy, 1804–1809, with some 380 folded documents which were in good condition.

Subsequent cleaning and simple conservation measures (humidification and flattening — see photographs to the right) have stabilised the material which was in better condition, though conservation work is in the early stages as there are at time of writing 350 parcels yet to be worked on. Some 2,980 pages of paper and 965 sheets of parchment are now ready for archival listing and the list produced by this phase of the project will be published by the Irish Manuscripts Commission once work has been completed.

All images reproduced with the kind permission of the Director of the National Archives.