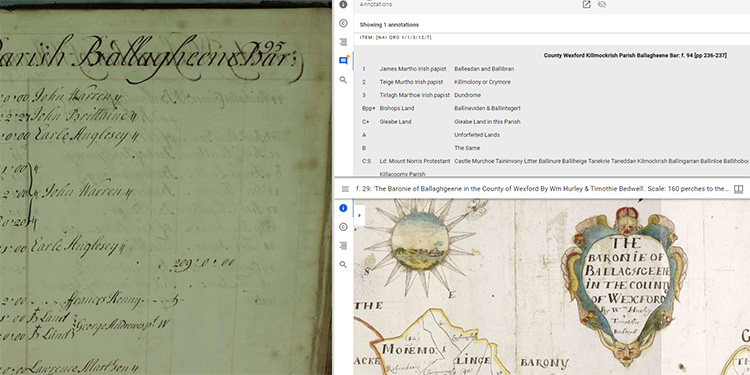 The launch of the Virtual Record Treasury of Ireland on 27 June 2022 has captured the imagination of many. The rich variety of searchable records available through the Treasury is truly amazing but within the 150,000 database records are gold seams of data waiting to be discovered.

Gold seams are full-scale reconstructions of entire series of archives that were destroyed in 1922. They bring together digitised images of replacement manuscripts with transcriptions and translations. These gold seams of data include deep historical context and exploration tools, providing an enriched understanding of life at the time the manuscripts were written. As a Core Partner, IMC has contributed in various ways to Gold Seams 1 (Medieval Exchequer) and 2 (Cromwellian Surveys of the Seventeenth Century).

The Cromwellian Surveys of the Seventeenth Century gold seam provides unprecedented access for anyone researching land ownership in Ireland throughout the early modern period. The Down Survey maps and Books of Survey and Distribution combined with the Civil Survey are extraordinarily rich in detail. They combine to provide a window into the world of the Irish Catholic nobility and the mainly Protestant ascendancy that replaced it after the Catholic élite were stripped of their estates, titles and privileges following the period of upheaval and confiscation which followed the 1641 Rebellion and ended with the defeat and exile of James II in 1688.

On Saturday 1 October 2022 IMC members will run a workshop to explore the images and transcripts of the 20 manuscript volumes of the Books of Survey and Distribution within the Virtual Record Treasury. More details about this event — which will form part of IMC’s contribution to the DCLA Festival of History — will be posted soon on our website.